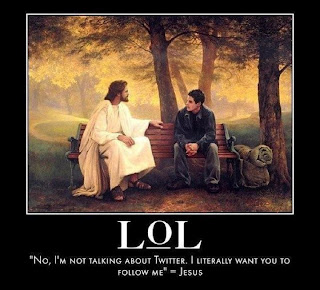 This week I saw a new motivational poster. Jesus and a young man on a park bench engaged in conversation and the letters “L.O.L” under the picture. LOL is the text shorthand for “laughing out loud.” It is sometimes just appended at the end of each phrase that some send in a text message or comment that they make on a Facebook post. The effect is that it is a kind of visual “nervous laughter.”

On the picture, under the Title; L.O. L. was the caption. “No, I’m not talking about Twitter. I literally want you to follow me!” (Jesus). With our electronic communication media we have managed to almost completely isolate or insulate ourselves from real face to face interaction with individuals. Instead we opt for a barrage of “tweets” or posts on Facebook, to the extent that our communications are even less than an inch deep and probably two or three miles wide.

One of the things we must continue to battle in our age today is the tendency toward superficiality. And this carries over into our relationship with the Lord Jesus. We have all seen the stereotype father portrayed in movies who is too busy for his son, so he gives him things instead, substituting the stuff for the relationship itself. And that is what we do with Jesus, giving our time or talent or treasure, instead of our heart, when he wants our heart first. “I literally want you to follow me!”

Matt 4:19 is where Jesus gives the first fishermen that invitation… “Follow Me and I will make you fishers of men.” Jesus wasn’t promising them great wealth or reward in the exercise of their faith, he was promising them that He would make them into people like Him! Jesus wants you to spend enough time around Him that you start looking like him. That was Jesus’ discipleship program! The bible says that Jesus both did and taught. His method was to bring the disciples along and do the stuff and let them watch. Then he let them do the stuff while He watched (see Luke 10).
And finally, Jesus left them to do the stuff, all on their own. That’s what the goal of our discipleship is – to be so familiar with Jesus and the way He did life and work and ministry and teaching – everything He said and did – that we do life and work and ministry and teaching just like Him!

And the process is just what Paul is talking about through the bulk of his letters. We’ve had opportunity to reflect on some of his thoughts over the past weeks, and now today, again we are given a key passage from his Philippian letter: (listen to it again from The Message)

You know my pedigree: a legitimate birth, circumcised on the eighth day; an Israelite from the elite tribe of Benjamin; a strict and devout adherent to God's law; a fiery defender of the purity of my religion, even to the point of persecuting the church; a meticulous observer of everything set down in God's law Book.
7-9 The very credentials these people are waving around as something special, I'm tearing up and throwing out with the trash—along with everything else I used to take credit for. And why? Because of Christ. Yes, all the things I once thought were so important are gone from my life. Compared to the high privilege of knowing Christ Jesus as my Master, firsthand, everything I once thought I had going for me is insignificant—dog dung. I've dumped it all in the trash so that I could embrace Christ and be embraced by him. I didn't want some petty, inferior brand of righteousness that comes from keeping a list of rules when I could get the robust kind that comes from trusting Christ—God's righteousness.
10-11 I gave up all that inferior stuff so I could know Christ personally, experience his resurrection power, be a partner in his suffering, and go all the way with him to death itself. If there was any way to get in on the resurrection from the dead, I wanted to do it.
Focused on the Goal
12-14 I'm not saying that I have this all together, that I have it made. But I am well on my way, reaching out for Christ, who has so wondrously reached out for me. Friends, don't get me wrong: By no means do I count myself an expert in all of this, but I've got my eye on the goal, where God is beckoning us onward—to Jesus. I'm off and running, and I'm not turning back.

This One Thing I Do

Paul often speaks in metaphors that are taken from the races at the Olympics. We are urged to follow him in his own pursuit of Jesus. A relentless pursuit that is focused on a single goal: To know Christ, in the power of his resurrection through sharing in the fellowship of His suffering. We see familiar words in these passages: The POWER (DUNAMIS) of His resurrection as Paul prayed in the first chapter of his letter to Ephesus; The FELLOWSHIP (KOINONIA) of His sufferings – we share on both of these levels, we are conformed in our deepest heart and being, into His likeness. What I found interesting in this investigation was that Paul uses a different word for being conformed here than he uses in Romans 12, where he tells us not to be conformed to the image of the world (not to be Pressed Into the world’s mold). That conformation is an outward one, so that we look like the world, we act and do what the world does, we “dress” like the world, so to speak. But the conformation that Paul is speaking of here is a deep, inner conformation to the character of Christ, through the modality of suffering – actually sharing in the same kind of suffering that Jesus went through. And we are first conformed to His death, so that we may also share in His Life.

This theme plagues us everywhere in the New Testament writings. I say “plagues us” because we so avoid it. In our American religion we see comfort and blessing materially as the ultimate signs of God’s love and favor, and thus of “knowing Him.” But Paul and Jesus, I might add, had a very different take on this concept than most of us do here in the West. For Paul it was the embracing of this suffering WITH Jesus, that brings one to the fullness of the inner conformation that is the goal of our faith. We also tend to see the things we DO FOR GOD as ways in which we get to know Him or we get to see Him work. While Paul comes to know Jesus through His Power – it is the Power of the Resurrection, not the power of his mighty works. When we speak of power, even using the forms of words that we derive from this word DUNAMIS we see different forms of power, DYNAMITE (explosive, destructive, sudden) and DYNAMO (constant, steady, useable and useful). The power that Paul commends here is the constant, inner, driving power of a New Life in Christ.

Unlike us who avoid the suffering of the Gospel – who avoid anything that will make us uncomfortable as we live our life and share with others – avoid anything that may bring a smart remark or a snide retort about our faith – and certainly avoid any kind of confrontation like Jesus had with people about their lifestyles and sin; unlike us, Paul chooses to make this his singular focus, as a means of coming to KNOW JESUS more fully.

Here is Paul’s prescription: This one thing I do, forgetting what lies behind and straining toward what lies ahead, I press on toward the mark for the prize of the high calling of God in Jesus Christ.

Today we are faced with myriads of challenges all around us. Economic troubles, political troubles, trouble believing, trouble hearing God in the maze of voices today. But God is calling us to do this ONE THING: TO FOLLOW HIM.

TO LITERALLY FOLLOW HIM. Paul calls it THE MARK OR GOAL FOR THE PRIZE OF THE HIGH CALLING OF GOD IN JESUS CHRIST!

Jesus is calling us – calling YOU to follow Him in the particularities of your life, day-to-day. To live your life in reference to Him FIRST. To run your particular race with Him as the goal line.

What has gone before this moment, doesn’t matter any more. He is able to take it and transform it and use it to CONFORM you more fully to His inner character. That is His will for you. That is the force of Paul’s prayer and his continuing argument across his letters.

Make this commitment this morning as you come forward, down the aisle, to our Anglican Altar Call – Communion! Every time you come to this table it is a new start – what is behind you is behind you, good or bad. Look at Jesus and all that He intends for you, and live your life from that reference point.